This effect is also known as the "miniature" effect; it allows you to focus on a specific part of the image while blurring the surrounding area. The aim of the effect is to simulate a miniature by producing an optical illusion in which the image resembles a photo of miniaturized scenery.

You can adjust 4 different parameters when creating the miniature effect: 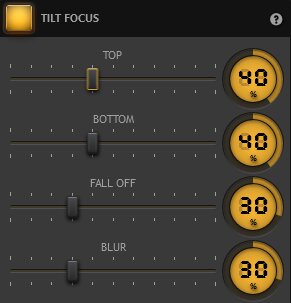 Focus can be created in one part of the image. In this example, an image of a city by a bay, adjusting the values for the two parameters, top, and bottom, produces a miniaturizing effect on the scenery in the middle of the frame. This effect will be displayed in the Preview window of the time-lapse software.

Note: this effect is available in the free version of Time-Lapse Tool.